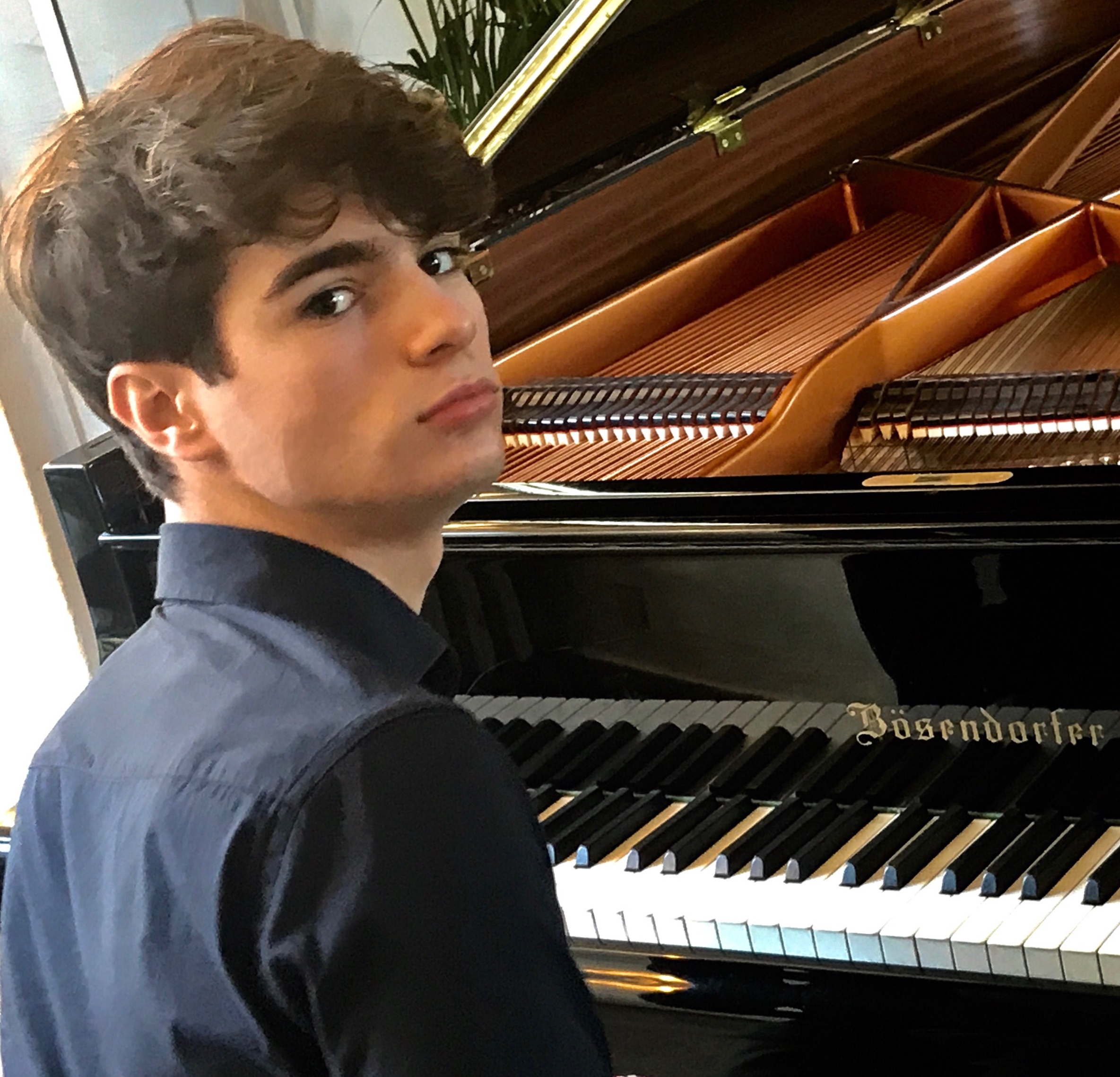 DANIEL NEMOV was born in Moscow, Russia in 2002. He started learning to play the piano from the age of 6. In 2017 he graduated with honours from the Children's Music School at the Moscow State F. Chopin College of Music Performance.

Now Daniel is studying at the Central Music School of the Moscow State Tchaikovsky Conservatory, in the class of Professor Natalia Troull.

He is the winner of the 1st degree Grant of the Mayor of Moscow in the sphere of culture and art (2017) and also the winner of Russian and international piano competitions:

Daniel performed with symphonic and chamber orchestras, in 2016 he performed Beethoven Concert No. 3 c-moll op. 37 with the Orchestra of the Southwest German Philharmonic in Konstanz, Germany. Daniel also participated in the international piano master classes, including Music Fest Perugia (Italy, 2017).

ELIA CECINO was born in 2001 and he began his studies at the age of 9 with Maddalena De Facci. At 17 he achieved his piano degree with the highest grade and commendation at the Conservatory B. Maderna in Cesena as a private student. Recently he has been admitted to the class of Prof. Eliso Virsaladze at the Scuola di Musica di Fiesole.

From 2012 he attends masterclasses with eminent pedagogues and pianists in prestigious festivals and
academies: in July 2014 he was selected by Aldo Ciccolini as active participant of his Masterclass during the “31st Musica Riva Festival International meeting for young musicians” in Riva del Garda; in 2017 by Lilya Zilberstein at the Accademia Chigiana in Siena and by Aquiles Delle Vigne at the Mozarteum in Salzburg. In 2018 he attended the Ferrara International Piano Festival with Christopher Elton and he won a scholarship to participate in the London Masterclasses with Norma Fisher. He attended masterclasses with Riccardo Risaliti, Giampaolo Nuti, Benedetto Lupo, Alberto Nosè, Marian Mika, Roberto Plano, Maurizio Baglini and Vincenzo Balzani, Ruben Dalibaltayan.

In the last two years Elia has been invited to give more than 70 solo recitals in music festivals around
Europe: at the Institute of Italian culture in Hamburg and at the Consular Italian Agency in Wolfsburg
(Germany); at Sale Apollinee of the Gran Teatro La Fenice in Venice (Italy); at Palace of Culture in Iasi
(Romania); at Teatro Thuillier in Caravaca de la Cruz, at the Cultural Center in Murcia and at Sala Eutherpe
in Léon (Spain), at the Baröcksaal of Grand Hotel Europa in Innsbruck (Austria); at Fondazione Pini for
Steinway&Sons and at Palazzo Litta for Bösendorfer during Piano City Milano; in Novi Sad (Serbia) during
the 8th World Piano Conference for the WPTA; at Casa Mozart in Rovereto for Mozart Italia; at Dvorana
glasbene šole in Radovljica (Slovenia); at the Oratorio S. Maria a Novoli and at the auditorium of Careggi Hospital in Florence for A.Gi.Mus, at Villa Bertelli in Forte dei Marmi, at Teatro Manzoni and Villa Scornio in Pistoia for “Amici dell’Opera”, at Palazzo Albrizzi and at Cavagnis Cultural Center in Venice, at Teatro Marcello in Rome during Festival delle Nazioni, at Sala Marizza in Fogliano Redipuglia, at San Remigio Auditorium in Vimodrone during Piano Talents Festival, at Sant'Antonio Church in Cellamonte during Monferrato Classic Festival, at Gabinetto di Lettura in Padova during Bartolomeo Cristofori Piano Festival, at Villa Litta in Monza for Yamaha during Yamaha Piano Discovery.
He performed as soloist with the Bacau Philarmonic Orchestra (Romania) conducted by Ovidiu Balan,
with the Sichuan Philharmonic Orchestra (China), with the Concentus Musicus Patavinus Orchestra of
Padova and San Marco Orchestra of Pordenone (Italy).

Elia was member of a piano duo four-hands which gained numerous first prizes, awards and recognitions at competitions and festivals. From the last years Elia has an intense chamber music activity in duo and trio with violin and cello. He performed at festival Estate Concertistica di Lamole (Florence), at Palazzo Cavagnis in Venice, at Teatro Duse in Asolo and at Chiesetta dell’Angelo in Bassano during Gioie Musicali Festival.